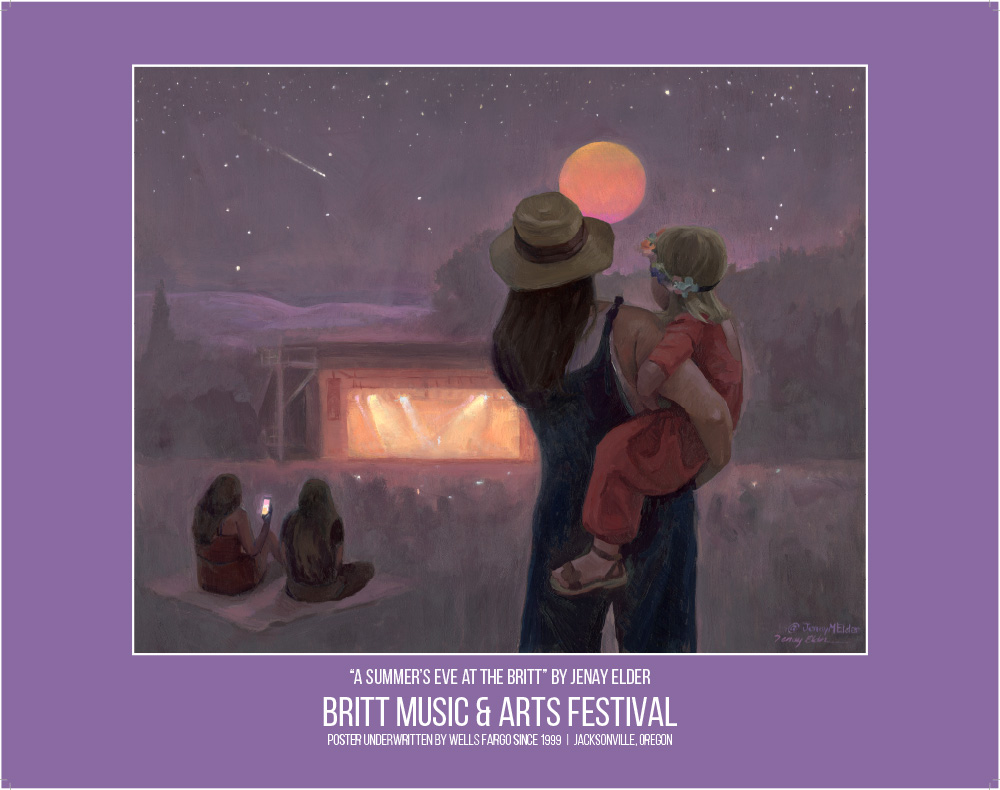 In a normal year, we would recognize Jenay at an announcement gathering before the season began, but nothing is the same during a pandemic. The posters were printed early (a whole year early!) and the artwork never made it onto the Season Playbill cover because there was no time to create a playbill as the 2021 Britt Presents Season was quickly assembled. With that, we present Jenay Elder and her amazing pastel: A Summer’s Eve At Britt. We think it truly captures the Britt Experience, passing the experience along to the next generation, as has happened over more than five decades.

Signed and unsigned copies of the 2021 Fine Arts Poster are available at Britt’s Medford Box Office.

Want to know more about Jenay? Check out her artist statement:

Painter Jenay Elder (b.1985) resides in Southern Oregon where her impressionistic oil paintings are known for their textured notes of color, representational quality, and sensitive subject matter. Jenay sold her first Monet-inspired, impressionistic landscape online at the age of fifteen in 2001 and has been making and selling art ever since. Her artwork can be found in regional gallery shows and plein air events as well as in private collections around the world. She is a recent recipient of the Haines Foundation grant and has participated in numerous paint-outs and shows, including the UVAA 30 under 30 exhibit.

Jenay grew up in a family that moved more often than not, living up and down the Pacific Northwest in places like Anchorage Alaska, Spokane Washington, and San Diego California. Her childhood shaped her mind’s eye with fields of wild daisy flowers while getting lost on unruly bike rides. These experiences helped build sensitivity to nature and allowed her time to soak in stillness with imagination. This deep appreciation of nature brought her to the art of picture making where subjects are depicted with insight and familiarity. During her process, she attempts to express to others the joy that life offers by being present.

Jenay developed a sharp eye for portrait drawing after studying cast and figure drawing with Soviet-trained teachers at The Ashland Academy of Art. Since graduating from the Academy (2010) she has pursued plein air painting and specialized workshops with today’s leading artists. This practice has further shaped her artistic vision.

In 2020 Jenay lost her studio and home in the Almeda wildfire in Talent Oregon. She estimates the loss of several hundred paintings, as well as academic studies. Since then, Jenay has taken some time to rebuild her painting and set up a new outlook and direction with her art. Jenay often teaches locally through studio to school programs and privately. Her teaching style is to balance encouragement and creativity with take-away fundamentals and technique.  Feel free to inquire.

See more of Jenay’s work at her website here