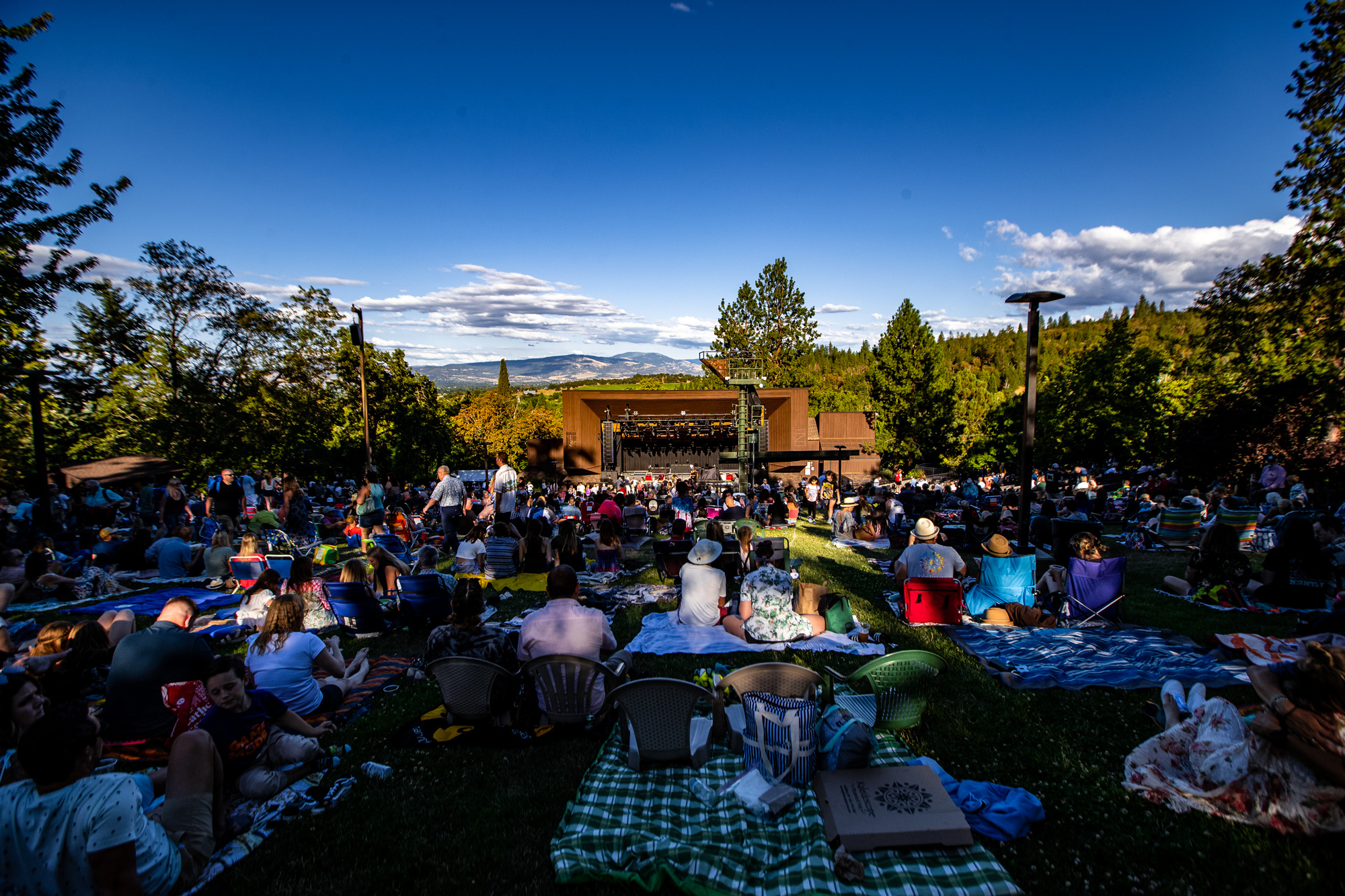 MEDFORD, OR — In its first full season since the beginning of the COVID-19 pandemic, the nonprofit Britt Music & Arts Festival declares its 60th Anniversary season a giant success. Britt thanks its patrons, members, business partners, media partners, artists, and fans for coming together to create one of the best Britt seasons in memory. During the 2022 season, Britt presented 27 popular Britt Presents concerts, seven Britt Festival Orchestra concerts, ten BrittKids Koncerts, and four Fellowship quartet performances.

“The season was a total delight from start to finish,” says Britt’s new President & CEO Abby McKee. “Stellar performances by an all-star roster of artists, enormous and enthusiastic audiences, fabulous weather… what more could we ask for? This summer was a case study of the power of the arts to bring communities together, and it’s been an absolute joy to be a part of it. Thank you to everyone who made this happen – I can’t wait to do it again in June!”

This year, the Britt Festival Orchestra (BFO) season began a full month earlier than in past summers, a move necessitated by historic wildfire interruptions of the BFO season in recent years. The plan worked well, as the skies were clear for the full orchestra season. Although the season kicked off on a cold, rainy day, that didn’t dampen the excitement of bringing the orchestra back to the Britt main stage for the first time in three years. BFO Music Director Teddy Abrams, who was awarded the prestigious title of 2022 Conductor of the Year by Musical America, directed a wide variety of music ranging from the Classical era to some of the most exciting composers alive today, with a diverse cast of guest artists including a full timba band. Abrams led Britt’s world-class orchestra in seven performances, enthusiastically welcoming BFO patrons back to the Britt hill to celebrate the opening of the orchestra’s 60th Anniversary season with a commissioned piano concerto by composer/pianist Sebastian Chang, who performed the work as soloist with the orchestra. The first week of the BFO season also included a Juneteenth celebration featuring cellist Seth Parker Woods with pieces composed by Black composers, including the world premiere of the full orchestral version of Julius Eastman’s Femenine, composed in 1974. The second week of the BFO season included the much-lauded baritone voice of Davóne Tines performing a collection of American song-poems, and a Peace concert honoring the people of  Ukraine. The final week of the season featured a morning Family Show with popular narrator/actor Bruce Campbell, a stunning performance of the Bernstein Violin Concerto, Serenade, by violinist Tessa Lark, and a closing night concert that had people dancing to the Cuban beats of the band People of Earth. The final concert completed a varied and memorable BFO season.

Ticket sales for the popular Britt Presents series took off early with strong membership enrollment. Attendance set a record run of 16 sold-out or almost sold-out concerts, starting with the first show, ZZ Top, and continuing through the Blues Traveler concert on September 8. The final concert, Celebrating Billy Joel, had the crowd singing along for a great send-off to a successful season. Although wildfire smoke was present off and on throughout the summer, it did not impact many Britt shows. Beyond two or three hazy nights and a couple of thunderstorm threats, the Britt pavilion saw one of the finest seasons in recent decades. Britt Presents concerts that were sold out or within 100 patrons of selling out were ZZ Top, Sarah McLachlan, Norah Jones, Jason Mraz, Old Crow Medicine Show, One Night of Queen, Michael Franti & Spearhead, Kaleo, Lindsey Stirling, Jim Gaffigan, Jordan Davis, Collective Soul/Switchfoot, Bonnie Raitt, Rebelution, Chicago, and Blues Traveler.

Once again, the 2022 Britt Presents series provided a wide variety of musical styles for patrons. The season also highlighted several women artists including the violin and dance phenom, Lindsey Stirling. Music styles changed every night, from 60s pop hits with the Happy Together Tour to reggae tours led by Iration and Rebelution. Britt also brought three tribute artists who proved to be popular: One Night of Queen, Dark Star Orchestra, and Celebrating Billy Joel, plus two comedians: Nate Bargatze and Jim Gaffigan. It was certainly a season to remember.

Britt Education & Engagement’s family-friendly BrittKids Koncerts returned to the Britt Performance Garden with ten concerts for kids after two years of online video programs. One of the BrittKids Koncerts was featured at the Lithia Park Bandshell in Ashland in order to share the popular children’s concert series with as many families as possible. Two special programs titled Drumtastic Beats were also offered at Britt and in Lithia Park. Additionally, the Britt Orchestra Fellows string quartet came back strong, rehearsing and performing with the BFO, and performing three concerts in locations around the region plus one of the BrittKids Koncerts. All Britt Education performances continued to be offered admission-free to the public.

Britt Education & Engagement programs continue all year: Fall residencies begin in October with string ensemble Sphinx Virtuosi (October 6-7) and award-winning percussionist Britton René-Collins (November 16-18). The Residency program brings teaching artists to schools in Jackson and Josephine counties, working with pre-school through graduate-level students. Britt’s free education programs occur throughout the year, and the community will continue to see a variety of offerings every month.  For more information about upcoming education events, visit the Education pages on the Britt website and join the BrittKids Klub for monthly emails about Britt Education & Engagement programs and schedules.

Overall attendance for the 27 Britt Presents concerts was 52,568, with an average attendance of 1,947 patrons per concert. Attendance per concert improved compared to 2021 while ticket prices increased by approximately $5.00 per ticket. The BFO season drew 5,991 patrons. Over 2,000 kids and adults attended the BrittKids Koncerts.

Ticket sales cover just 60% of Britt’s operating expenses on average for the Britt Presents season and 20% for the Britt Festival Orchestra season. As a nonprofit organization, Britt relies on contributed income to cover the gap. Membership numbers grew by 21% over 2021, with a total of 1,556 members. Business Partner contributions increased over 2021, to a record $415,000 from 68 business partners. Grant funding through foundations continues to grow and support our operations and education programs. General operating and program grants totaled $150,000.

The Britt Membership drive for 2023 will begin in early November. To learn more about supporting Britt, visit http://www.brittfest.org/supportbritt.

A selection of photographs that can be used in conjunction with this story can be downloaded from the following online location. Names for photo credits are embedded in the file names.https://spaces.hightail.com/space/HVqDu4odJK