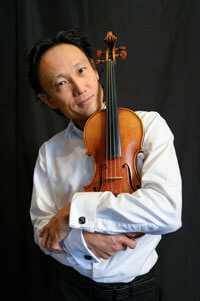 HOMETOWN: Honolulu, HI
PROFESSIONAL EXPERIENCE: Currently Concertmaster with the Hawaii Symphony Orchestra
BACKGROUND/EDUCATION: Of Korean descent, but born and raised in France. (Parents and siblings live in France.) Attended the Paris National Conservatory of Music, and Indiana University. Worked with Colorado Symphony, Royal Philharmonic Orchestra of London
CAREER INSPIRATION: The human interaction. (Communication without words.) Also that it was a respected field.
MUSICAL TASTES: Other than classical, motown, Jamiroquai.
MUSICAL INFLUENCES: My first teacher, who taught me all about the musical world, and MauriceAndré, French trumpetist, who I heard when I was 11. Transcending.
IF YOU WEREN’T A MUSICIAN: Probably music administration or running a summer music camp, which is what I'm already doing.
Read More

BRITT HISTORY: First year was 2001.
SOUTHERN OREGON FAVORITES: Spending time with my host family, who have become like parents after all these years.
FAVORITE BRITT MEMORY: When Maestri Trudeau, DePriest and Bay came and conducted the orchestra. I finally had a true sense of the Britt Classical heritage. 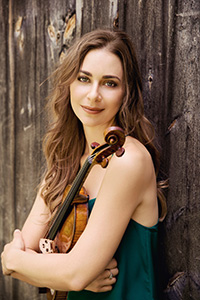 HOMETOWN: Vienna, Austria
BACKGROUND/EDUCATION: Alexandra Preucil was born in Atlanta, Georgia and began the violin at the age of three. Former Assistant Concertmaster of the Cleveland Orchestra, Ms. Preucil currently resides in Vienna, Austria leading and collaborating with ensembles around the world. She is currently an associate member of the Mahler Chamber Orchestra and a member of the Haydn Philharmonie. Other recent appearances have included performances with the Chamber Orchestra of Europe, Vienna Radio Symphony Orchestra, Vienna Chamber Orchestra, Kristiansand Symphony Orchestra, and the Louisiana Philharmonic Orchestra.
Festival appearances include the Sun Valley Music Festival, Britt Festival Orchestra, Mainly Mozart, Lockenhaus Chamber Music Festival, Festival de Febrero, and Santa Fe Chamber Music Festival.
Dedicated to music education and community engagement, Ms. Preucil has created and performed programs for all ages. In addition to teaching and giving masterclasses, she was named Director of the Britt Festival Fellowship Program. Read More

Ms. Preucil graduated from the Cleveland Institute of Music with a bachelor’s degree in music performance and a minor in dance. While in school, she held the position of Assistant Concertmaster with both the Akron and Canton Symphony Orchestras. As a member of the award-winning Svanito Quartet, Ms. Preucil studied with members of the Cleveland Quartet, Takacs Quartet, and Cavani Quartet while performing across the United States. 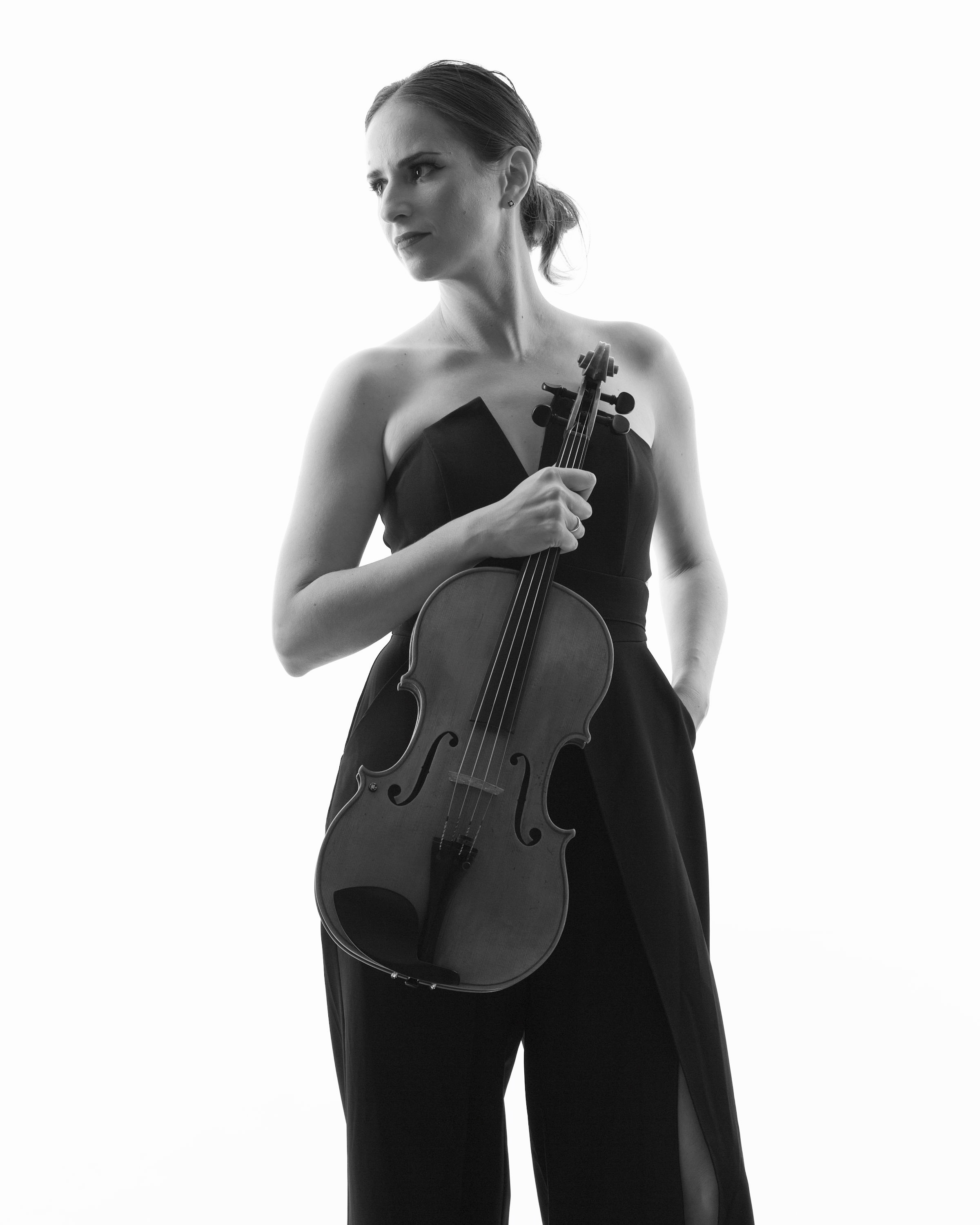 HOME ORCHESTRA: Louisiana Philharmonic Orchestra
BACKGROUND/EDUCATION: B.M., Violin (University of Massachusetts, Amherst 2006); M.M., Viola (New England Conservatory of Music, 2008). During my time in Boston, I played with the Boston Philharmonic and the Boston Modern Orchestra Project, and also as a substitute with New World Symphony. I was fortunate to serve as a fellow at the Tanglewood Music Center from 2007-2009, and the Kneisel Hall Chamber Music Festival in 2010. In 2014, I was a quarterfinalist in the Primrose International Viola Competition, and in 2015 became a founding member of the Polymnia Quartet. Major teachers include James Buswell, Marylou Speaker Churchill, Kathryn Lockwood, Ed Gazouleas, and Carol Rodland.
CAREER INSPIRATION: I've been drawn to music since I was very young, but the thing that motivated me to pursue it as a career was the knowledge that I would never be "done" with discovering new ideas and improving myself. I love having access to this universal language.
Read More

MUSICAL TASTES: My favorite composers are Bach, Prokofiev, and Shostakovich, but I also listen to a variety of music styles.
MUSICAL INFLUENCES: My teachers have been my greatest inspirations, not only as mentors but as players themselves. Marylou Speaker Churchill and James Buswell were an incredible combination to study with, and had profound impacts on my musical life in different ways. They gave me the tools to continue teaching myself indefinitely, which must be the greatest gift a teacher can give. Many other members of the UMass, NEC, and Tanglewood string faculty were incredibly encouraging and took great care in helping me switch from violin to viola. Tanglewood was an experience that greatly shaped my career path as a violist--there, I was exposed to some of the top conductors and chamber musicians in the world.
IF YOU WEREN’T A MUSICIAN: I've never been one to make plans.
BRITT HISTORY: Playing "Symphony for Nature" at Crater Lake with the Klamath Tribe was my first experience at Britt, and it will stay with me forever.  It was an incredible and moving introduction to southern Oregon. 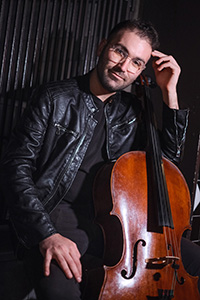 HOMETOWN: Oakland, CA
BACKGROUND/EDUCATION: Native to Los Angeles, cellist Evan Kahn has been praised as “a cellist deserved of serious listening” for bringing his “electrifying … nuanced and colorful” style to all of his collaborations, from concerti to chamber music to contemporary performances. He has commissioned and premiered over 60 works by composers from around the world, including his father’s Cello Concerto.

He is resident cellist for a number of Bay Area ensembles, including Ninth Planet, After Everything, the Mythica Project, and the Farallon Quintet. He is currently recording a contemporary album, to be released in 2023, with works by Erberk Eryilmaz, Jörg Widmann, Niall Ferguson, Damián Ponce de León, and others.

Evan attended Aspen Music Festival on a fellowship for four summers, where he studied with Juilliard professor Darrett Adkins and played co-principal in the Aspen Academy of Conducting Orchestra, the Aspen Philharmonic as an Orchestral Leadership Fellow, and as a fellow in the Aspen Contemporary Ensemble. Other summers were spent playing chamber music at the Taos School of Music, as resident cellist at the Cactus Pear Music Festival in San Antonio, and the New York String Orchestra Seminar, where he served as principal cellist.

In addition to performing and teaching, Evan enjoys playing board games and watching British television. He plays on a cello by Italian luthier Carlo Carletti, c. 1900, and a bow made for cellist Lynn Harrell by archetier Paul Martin Siefried. 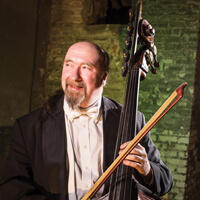 HOMETOWN: New Orleans, LA
PROFESSIONAL EXPERIENCE/BACKGROUND: Principal Bass at Louisiana Philharmonic since 1996. Performed extensively with many diverse ensembles including the Aspen Festival, Chautauqua (NY) Festival, Colorado Philharmonic (NRO), Colorado Music Festival, the LaSalle Quartet, and as a soloist with Richard Stoltzman, Gene Bertoncini, Nigel Kennedy, Bobby McFerrin, and many others. Has served as Bass Instructor for the Music School at Loyola University and also on the Board of Directors of the International Society of Bassists (ISB) as bassist/composer.
In 1984, he began his pursuits in composition, recognizing that the solo repertoire for his instrument was limited. Since then, his published work has expanded to other solo instruments, as well as for chamber orchestras and small ensembles. He has published many works and received acclaim for his compositions. In 1995, he won first prize in the Allen Ostrander International Trombone Composition Competition, sponsored by Ithaca college. Other works include his Concerto for Double Bass, Strings & Harp, commissioned by Philadelphia Orchestra and performed on the 1997-98 subscription series of the Philadelphia Orchestra.
YEARS AT BRITT: Since 1994
FAVORITE BRITT MEMORY: The commission and performance of Celebration, a tone poem for large orchestra, for the 50th Britt season in 2012.
Photo provided by Zack Smith Photography.